SHOP
Would you like to Advertise with us? Contact us with your website and business and we will gladly promote you!
CAMPMOR GEAR
GRAYSON GALLERY & ART CENTER
CARTER CAVES
OLIVE HILL TRAIL TOWN
GEOCACHING.COM
GREENBO LAKE
YATESVILLE LAKE CABIN
THE CARTER COUNTY EXPERIENCE
GRAYSON TOURISM  HEART of THE PARKS
LAUREL GORGE
The Little Sandy Lodge

TRIP CONSIDERATIONS, WAIVER, and FAQ
If you are interested in reviewing our waiver  just let us know and we will email you a copy and answer any questions you may have. We recommend reviewing  the waiver prior to your trip so you have a full understanding of any risks involved and don't feel rushed on the trip day to review it.
What to Expect: Each of our trips are unique.  All will be one of a kind based on the crew we have going along with us, and an adventure always holds surprises. Once you select and reserve your trip, we will contact you with more information specific to the trip you reserved. We will also send you a copy of the waiver to review. Most of our trips require fee due upon reservation and nonrefundable unless the cancellation is on our end, in which case you will receive a full refund. Some trips indicate that full fee may be taken on site. Please see trip descriptions for more info.
Trip Levels: If a trip description indicates a "level" this means the trip may not be suitable for all. Level 3 and above are not for anyone 17 or under or anyone with  existing health conditions. We recommend consulting with your physician before you make your selection.
What supplies are needed on trips: Once you reserve a trip with us either online, by phone, or in person, we will send you confirmation of your specific trip including a list of any supplies or materials you may need on that trip. Each trip has a varied list of recommended supplies specific to your selection.
Why don't you offer more trips? Currently, this is a part-time venture. The business will grow based on interest and demand. If you have an idea of a trip you would like to see us offer, please drop us a line and we will consider it!
Can children go on trips? Anyone under 18 is required to have parent or legal guardian signature on waiver. Some trips that are indicated level 3 and above are not for children under 17. Some trips, such as camping, are appropriate for children, while others pose risk. Our liability insurance does not allow the rental of kayaks to anyone under 12 years old regardless of parent waiver signature. Please provide ages of those in your group during registration and we will let you know if that trip is appropriate for children based on age and experience.
​Is there a weight limit for the kayaks?  Yes. Our kayaks are ranked at a 280lb weight limit.
If you have questions not listed here, please message us and we will get back to you ASAP!​
BACK TO TOP
THE TRISTATE KAYAKERS

Hidden Cove and a Midnight Pursuit

Hidden Cove and a Midnight Pursuit: By TIM & AMANDA GRIGSBY 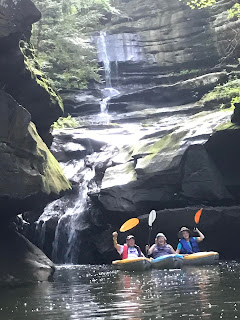 Hidden Cove waterfall is beautiful and exciting no matter what time of day you visit. Being One of our most popular attractions on Grayson Lake, we ventured on what was probably our 100th or more trek to the cove last weekend.

It was one of the hottest days of the summer, but we still had fun and went back again the very next night for the Glow Paddle put on by The Army Corps of Engineers, Carter County Tourism, and Elliott County Tourism.

When darkness fell on the lake we had only the stars above and the glow lights decorating our kayaks to get us back. No matter how many times we visit the cove, and no matter what time of day, there is always something new to see or experience.
Once you enter the “hidden” entrance to the cove there is that moment of ahhhh it’s “like the land before time” as Tim says.
We always enjoy watching people go through the rocks toward the waterfall for the first time! Someone always says, “we are going where...in there?”

We just smile. We haven’t met a disappointed kayaker yet.

During the glow paddle, over 65 people showed up to make the trip at night. Some kayaks were decked out with glow sticks and lights. 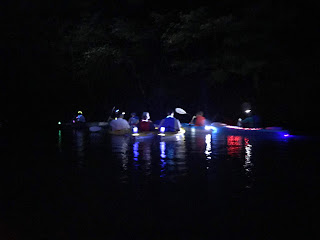 We all headed out with park rangers Ashley Johnson and Alice Hall following behind in safety patrol boat for lighting and safety checks. We are so excited to have these two and the corps supporting events like these at Grayson Lake. Alice reached out to us early on about her idea for the glow paddle, and we couldn’t have been more excited to lead it.

Carter County Tourism members Renee Lemaster Stewart and Kara Johnson handed out free dry bags and glow sticks to participants. We had lights all around our kayaks, wrists, and necks. We put a blue cup over our stern light to create a cozy purple/blueish glow in the water.

As we entered the cove that night we were greeted by what sounded like a screech owl. It sounded eerie and beautiful at the same time. The light from our boats attracted a school of minnows who followed patiently behind the kayak.

It reminded me of caving a bit as we maneuvered through the passage in the darkness, only our headlamp lighting the way. Though you couldn’t see as much at night, the waterfall itself was running, and the echoing sounds of the water as it flowed delivered its usual promise of tranquility.

We had paddlers from all across the tri state area show up. There were kayaks, a paddle board, and one canoe making the trip with us and among them, even a doggy who happily tagged along. You would have had to be there to see those stars twinkling above us that night. They all looked so bright from the lake. One person said they saw two shooting stars on our way back.

Thanks to members of Carter County and Elliott County Tourism who made the actual paddle with us, and to park rangers Alice and Ashley with the Army corps of Engineers For your support and ideas!

If you have not already, be sure to visit Hidden Cove for the cliffs, the swimming holes, the fishing, V Falls with other waterfalls along the way, and of course The Hidden Cove waterfall itself. 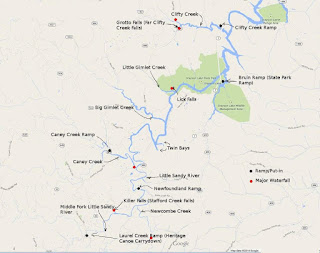 Sadly, due to COVID19 and changes in our family,  we are no longer renting kayaks.  We still do organize local kayak truips and hikes, and will always promote area activities and attractions, we are just no longer able to do so for business at this time. Wellness services are still offered by appointment with Amanda Grigsby  and some products are still available for sale.  Follow our facebook page for planned outings and paddles. These trips will be at your own risk and will be BYOK and/or gear. Let us know if you have questions. GOA will hold no liability.  We love our community and have greatly appreciated all support over the years!